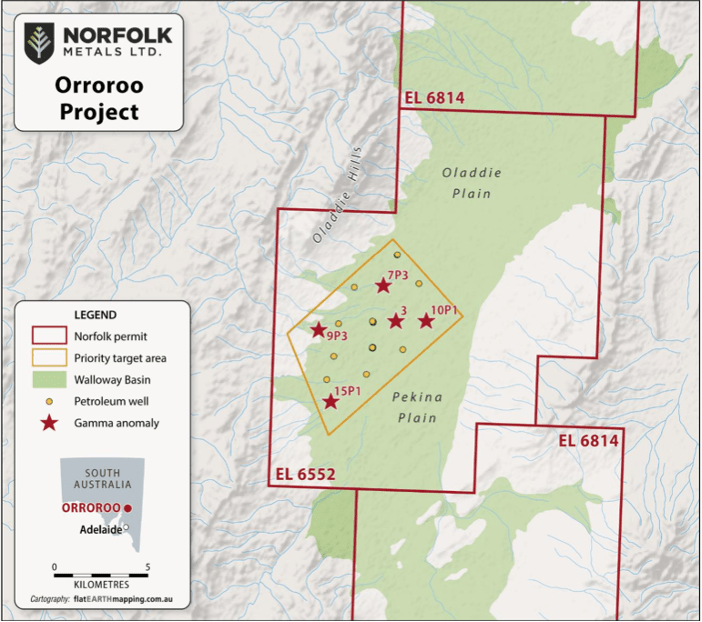 Maiden drilling is already underway at Norfolk Metals Roger River copper, gold and base metals project in Tasmania and now the company is gearing up to plan drilling targets at its Orrorro uranium project in South Australia in Q1 2023.

The plan is to target new greenfield uranium discoveries in the Walloway Basin, where the company controls 2 exploration licences totalling 659km2.

The Walloway Basin has never been explored for uranium, with historical exploration limited to a drill program by Linc Energy during 2009 to 2011, delineating coal.

But here’s the interesting part, the coal measures are considered a prime reducing environment for the precipitation of uranium mineralisation – and open file reports from Linc’s work reveal several strong gamma anomalies typical of the “oxidised tails” of roll-front style mineralisation.

Initial work will comprise a downhole geophysical survey (Spectral Gamma and PFN) of historical petroleum wells to better understand the source of the gamma anomalies and assist in ranking and prioritising targets for drill testing.

“While the Walloway basin has an established history of coal exploration, it has never been assessed for uranium, despite being adjacent to some of the major uranium districts in the northern Flinders Ranges and the Frome Embayment,” Norfolk Metals (ASX:NFL) executive chairman Ben Phillips said.

“This initial geophysical program will help understand the uranium potential and verify the source of the gamma anomalies in historical Linc Energy petroleum wells.

“A successful work program has the ability to enhance the prospectivity of the Orroroo Project for very little capital cost to NFL.”

And Norfolk says the project is truly a greenfields exploration opportunity with massive upside potential – particularly when you consider the island is also host to several world-class base and precious metal deposits such as Rosebury (MMG) and Mount Lyell (New Century Zinc).

“If we find anything even remotely of commercial potential there, well, we own the whole region,” Phillips said.

“It’s not like other deals where guys pay $5m for a postage stamp that’s been drilled out for the last 10 years.

“The asset acquisition was at an extremely low EV for the shareholders and it’s really the blue sky potential that was the attraction with these projects.”

With drilling ongoing and samples at the lab, the company plans to do some Induced Polarisation work over the first hole with the intent of finding conductor plates which could be representative of massive sulphides.

This article was developed in collaboration with Norfolk Metals Limited (ASX:NFL), a Stockhead advertiser at the time of publishing.

The post Norfolk forges ahead with maiden drilling in Tasmania whilst targeting uranium at its Oorroro project in SA appeared first on Stockhead.