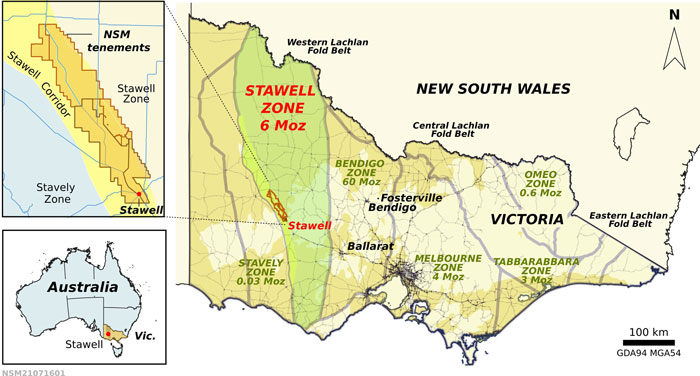 North Stawell Minerals is building on its success in the gold-rich Stawell region of Victoria, having now uncovered highly anomalous grades in a previously untested zone that bears remarkable similarities to the Wonga deposit at the multi-million-ounce Stawell gold mine.

North Stawell Minerals (ASX:NSM) has made significant progress in its pursuit of a repeat of the Stawell gold mine in Victoria, having made several notable discoveries in its most recent drilling program.

“Aircore drilling is an extremely effective tool for penetrating Murray Basin cover,” he explained. “Drilling 12km north of Stawell has intersected a previously untested granite (the Wimmera Park Granite) with a 300m wide gold and arsenic anomalous zone across the contact with surrounding metasedimentary rocks.

“The Wimmera Park Prospect has encouraging similarities to the Wonga Deposit south of Stawell that has historic production of 294,000oz of gold at 4.8g/t. The target occurs in the same structural corridor, with the same geology and interpreted structures with analogous orientations to structures at Wonga.”

Importantly, the strong correlation between gold and arsenic is encouraging as an effective vector for significant mineralisation at Wimmera Park.

The Wimmera Park target remains open between drilling lines (800m), along the granite contact and for 2km to the south, making it a compelling target for North Stawell Minerals to infill drill in the next phase of drilling.

Strong foundation for the next Stawell gold mine

North Stawell Minerals is exploring for repeats of the multi-million-ounce Stawell mine under a thin blanket of unmineralised sedimentary cover.

A distinct advantage of exploring for this type of mineralisation is that a basalt core controls mineralisation sites, and the basalt can be remotely mapped with geophysics.

A high-resolution airborne gravity survey undertaken in the June quarter of the 2021 financial year completed the data suite required for effective exploration.

Recent successes include almost doubling the strike of the gold zone at the Gellatlys prospect to 3.5km, intersecting further anomalous gold at the Glenorchy East, Gready and Forsaken prospects, uncovering a large gold anomaly at the Lubeck Tip prospect and extending gold mineralisation at the Holts prospect to 1km.

“The Wimmera Park prospect remains significantly undertested and presents a clear phase-two drilling target for the next drill season to test the extents of the mineralisation,” Krause said.

“The encouraging results at the Wimmera Park prospect diversify possible gold styles under cover to include granite-related gold mineralisation. Other interpreted granites with similar structural settings will be reviewed prior to the coming field season for additional mineralisation potential.”

Krause said North Stawell Minerals’ strategy for exploring through thin cover has proven to be successful for both Stawell ‘type’ mineralisation and now intrusive-related mineralisation.

The culmination of all these successes demonstrates the yet untapped potential of the Stawell district, an historic goldfield dating back to the 1850s and a key part of Victoria’s aptly named ‘Golden Triangle’.

To the west of North Stawell Minerals’ highly prospective landholding is the Stawell gold mine, which up until 2008 was Victoria’s top gold producer.

The Stawell mine was restarted a couple of years ago and the owners have identified the potential for a major expansion to production after uncovering extensive high-grade gold within the Magdala Basalt Dome.

The Stawell Mineralised Corridor has so far yielded 6 million ounces of historical production.

This effectively established the company as the exploration arm of Stawell Gold Mines, with about 60% of its shareholding in common, providing numerous benefits including a route to production in the event North Stawell Minerals’ makes a multi-million-ounce discovery.

Krause told Stockhead this link effectively guaranteed access to the plant and mill at the Stawell gold mine.

“Just the fact that we’ve got access to that infrastructure puts us a mile in front timing wise etc than anyone else,” he said.

Exploration to date has identified 20+ basalt dome targets, similar to the Magdala Dome structure that hosts the gold within the neighbouring Stawell mine, and other targets in the Stawell Corridor.

But before Stawell Gold Mines acquired the ground at the end of 2017, exploration had been sparse because any potential new discoveries were masked by shallow cover.

The Geological Survey of Victoria estimates that there is around 38 million ounces of gold under cover in the northern part of the Stawell Zone, most of which relates to the Stawell Corridor.

This provides a massive opportunity for North Stawell Minerals to find the next major gold mine in the region, with the company so far defining 30km of highly prospective strike under cover-dominated tenements.

“This drilling campaign is a first pass confirming all of the geophysical work that’s been done,” Krause said.

“We’ve confirmed the structures are mineralised and that they’re the sort of structures that we’re looking for. We’re looking for that size, strike length etc that’s capable of hosting a multi-million-ounce deposit.

“Of the targets we’ve tested, we’ve probably found about seven or eight of them that are capable of doing that, but we’ve got to confirm that with second phase drilling, which is coming up.”

Phase two drilling will be focused on determining how big the system is, while phase three will be aimed at turning it into a resource.

Reverse circulation drilling has been completed in the southern tenements, with assays expected to be released in the current quarter.

North Stawell Minerals is still fully funded to execute on its exploration plan, with $6.7m cash in the bank.

This article was developed in collaboration with North Stawell Minerals, a Stockhead advertiser at the time of publishing.