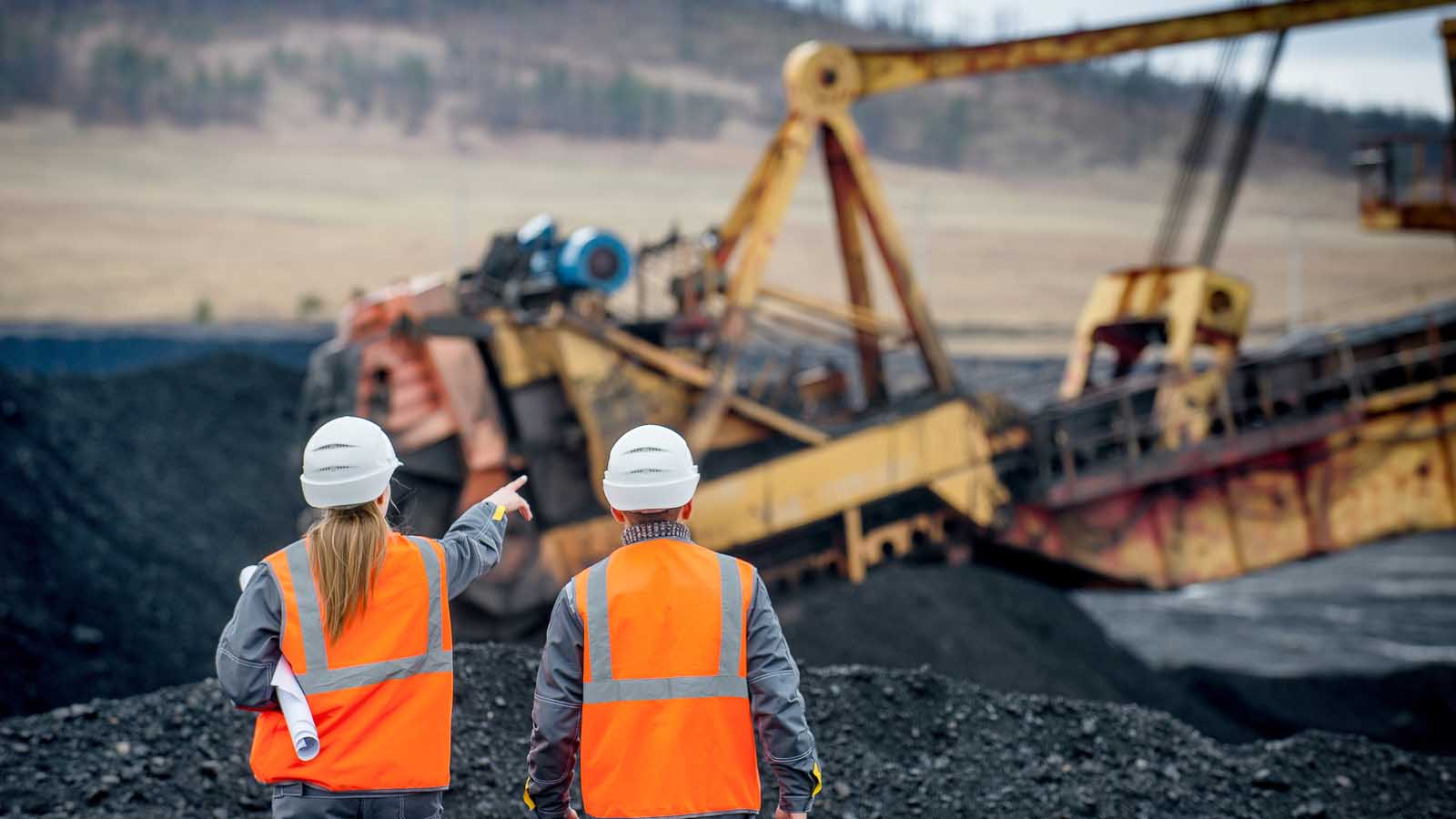 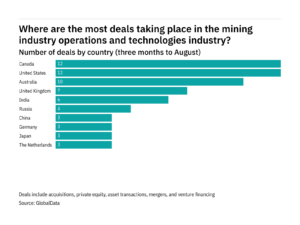 The figures, which cover the top mining industry operations and technologies companies, show the markets in the US and Canada to be the most active, with 12 deals taking place in each region over the last three months.

Below are some of the largest completed deals to have taken place in the last quarter.

Rio Tinto, a UK-based mining and metals company, has made a non-binding proposal to acquire 49% stake in Turquoise Hill Resources Ltd, a Canadian mineral exploration and development company.

The proposed transaction follows the recent comprehensive agreement reached between Rio Tinto, Turquoise Hill, and the Government of Mongolia to move the Oyu Tolgoi project forward, reset the relationship between the partners and approve commencement of underground operations.

Exxaro Resources, a South African miner and CNIC Inc, intends to acquire 60% stake in Lekela Power, a renewable-generation firm, from Actis LLP, a private equity company, according to people with knowledge of the matter.

76KK, a Japan-based holding company and a subsidiary of KKR & Co, a US-based private equity firm, has acquired Mitsubishi Corp-UBS Realty Inc, an asset manager established as a joint venture from Mitsubishi Corporation and UBS Asset Management (Americas) Inc, for a cash consideration of ¥230 billion ($2bn).

Going forward, the asset manager, which was previously called MC-UBSR, will operate under the name ‘KJR Management’, effective immediately.

76KK will also acquire the units in JMF and IIF currently held by Mitsubishi at market price, thereby strengthening the alignment of interest between KKR and the unitholders of JMF and IIF.

Atlas Copco, a provider of industrial productivity solutions, has agreed to acquire LEWA GmbH, a manufacturer of diaphragm metering pumps, process pumps, and complete metering systems, and Geveke, a company that distributes compressors and engineers advanced and complex process pump installations, from Nikkiso, company providing specialized pumps and systems in the industrial business, for a combined purchase consideration of €670m. The company will fund the consideration from its existing funds.

Baker McKenzie is acting as legal advisor to Nikkiso in the transaction. The transaction is expected to be completed during the second quarter of 2022, subject to regulatory approvals.

Mikael Andersson, president of Atlas Copco´s Power and Flow division, said, “We are happy to welcome our new colleagues from Geveke to the Atlas Copco’s family. Geveke has a strong quality reputation, engineering, and application know-how, and it will be a good fit in the Atlas Copco’s business strategy for industrial pumps.”

Western Mining has announced plans to sell 27% stake in Qinghai Dongtai Jinel Lithium Resources for consideration of CNY3,342m ($528m). Both the companies are based in China.

Britishvolt, a UK-based electric vehicle battery startup, has to raise £200m in a Series C funding round from Bank of America, Citibank, Peel Hunt, and Glencore.

Under the deal, Glencore invested £40m in Britishvolt. Lazard acting as financial advisor to Britishvolt in the transaction.

Viatec, a US-based manufacturer of plug-and-play electronic power take-off systems that support the electrification of utility fleets, has secured a series B funding round led by Terex Corporation, with participation from Duke Energy.

In conjunction with this investment, a Terex representative will fill one of five seats on Viatec’s board.

Aymium, producer of renewable biocarbon products, has raised funds in Series B private equity financing. The financing was led by Sandton Capital, Nippon Steel Trading, Steel Dynamics, and Rio Tinto. With this investment, the total investment in the company is over $200m.

Proceeds from the financing will be used to advance construction of Aymium’s newest production facility in Williams, California and another in the Pacific Northwest. The new facilities will employ over 125 people combined and will be operational in 2023. Production from both plants is contracted through 2037 and is projected to reduce over 1.4 million tons per year of CO2 equivalent to removing over 300,000 cars per year from the road.

Metals Acquisition to acquire CSA copper mine from Glencore for $1.1bn – 17 March ($1.1bn)

Metals Acquisition has entered into a definitive sale and purchase agreement with Glencore to acquire CSA for total consideration of $1.1bn (consisting of $1.05bn of cash and $50m of common equity) plus a 1.5% copper NSR.

The transaction will be effected by the acquisition by MAC’s 100%-owned subsidiary, Metals Acquisition (Australia), of the issued share capital of Cobar Management Pty Limited, a 100%-owned Glencore subsidiary which owns CSA.

The transaction has been unanimously approved by the board of directors of Metals Acquisition, and is expected to be completed in 2022, subject to the approval of the company’s shareholders and other customary closing conditions, including regulatory approvals.

Citi is serving as financial advisor and Squire Patton Boggs and Paul Hastings are serving as legal advisors to Metals Acquisition. Citigroup Global Markets, Canaccord Genuity, and Ashanti Capital have been engaged as placement agents in connection with an equity raise.

ArcelorMittal, an integrated steel and mining company, has signed an agreement to acquire an 80% shareholding in a hot briquetted iron (HBI) plant located in Corpus Christi, Texas, from Voestalpine, an Austria-based global manufacturer of high-quality steel products.

The transaction values the Corpus Christi operations at $1bn and closing is subject to customary regulatory approvals.

In parallel with the transaction, ArcelorMittal has signed a long-term offtake agreement with Voestalpine to supply an annual volume of HBI commensurate to Voestalpine’s equity stake to its steel mills in Donawitz, Austria and Linz, Austria.

Highland Gold Mining, a UK-based mining company, has signed an agreement to acquire 100% stake in the Russian assets of Kinross Gold Corporation and and its affiliates for C$680m in cash.

The deferred payments are secured by an extensive security package that includes share pledges, financial guarantees, and an escrow account. All payments under the agreement are payable in US dollars.

The transaction includes the acquisition of the Kupol and Dvoinnoye operating mines, exploration assets including the Chulbatkan project, as well as associated infrastructure. The transaction is subject to the approval of the Russian Government and the finalisation of certain ancillary agreements.

ArcelorMittal, a Luxembourg-based steel manufacturing company, has agreed to invest C$600m in the construction and development of solar and wind power projects in Andhra Pradesh, India. The combined installed capacity of the projects will be 975MW. The investment per megawatt will be $400,000.

The project will combine solar and wind power and be supported by Greenko’s hydro pumped storage project, which helps to overcome the intermittent nature of wind and solar power generation.

The project will be owned and funded by ArcelorMittal. Greenko will design, construct, and operate the renewable energy facilities in Southern India. Project commissioning is expected by mid-2024.

ArcelorMittal’s joint venture company in India, ArcelorMittal Nippon Steel India (AM/NS India), will enter into a 25 year off-take agreement with ArcelorMittal to purchase 250MW of renewable electricity annually from the project. This will result in over 20% of the electricity requirement at AM/NS India’s Hazira plant coming from renewable sources, reducing carbon emissions by approximately 1.5 million tonnes per year.

The project offers AM/NS India the dual benefits of lower electricity costs and lower CO2 emissions, and it also provides an attractive return on investment for ArcelorMittal.

Asante Gold has entered into a share purchase agreement to acquire the 90% interest in the Chirano gold mine, from Kinross Gold for a total consideration of $225m. Both the companies are based in Canada. The Ghanaian Government retains a 10% carried interest in Chirano.

The upfront consideration for the Chirano acquisition will be comprised of $115m in cash and $50m in common shares of Asante based on the 30-day volume-weighted average price of the Asante shares prior to closing of the Chirano acquisition and provided the issuance of the Asante shares will not result in Kinross exceeding a 9.9% share ownership in Asante. Kinross will also receive a total deferred payment of $60m in cash, with 50% payable on the first anniversary of closing and the balance payable on the second anniversary of closing. If the 9.9% share ownership limit is reached, the remainder of the $50m in share consideration will be paid by increasing the deferred cash payments in equal portions. Kinross has agreed that it will hold its Asante shares for at least 12 months following the closing.

The transaction is expected to be completed on or around 31 May 2022. The Government of Ghana has issued a letter of no objection to the change of control of Chirano and the transaction is not subject to a financing condition.

Canaccord Genuity and Durose Asset Management are acting as financial advisors to Asante, with Bennett Jones acting as legal advisor for the transaction.

The post These were the biggest mining industry operations and technologies deals in the three months to April appeared first on Mining Technology.