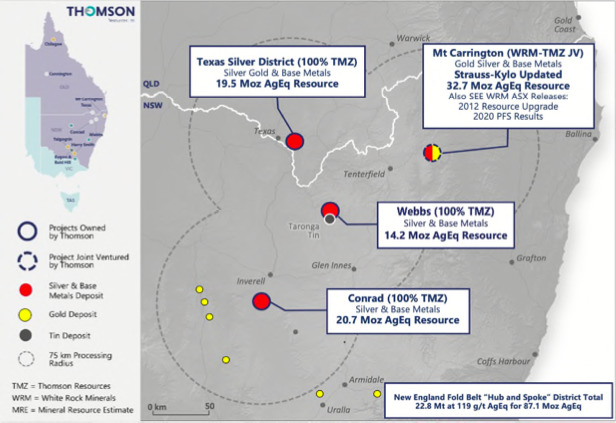 The report has flagged a central processing option with satellite sites at the Mt Carrington project and the Webbs Silver project that feed into a Central Processing Facility at a new site near Tenterfield, NSW.

Indicative cash flows (before capital expenditure and capital costs) provide a good positive cashflow over the 8-year project life using a silver price of A$28/oz and only the Webbs, Conrad, Strauss and Kylo deposits.

The benefit of bringing Webbs online early means that if the zinc concentrate from Strauss could not reach saleable grade, it could be processed in the Albion Process with the Webbs concentrate to generate the additional zinc revenue.

“We now have a clear pathway forward as to what the New England Fold Belt Hub and Spoke Strategy (“NEFBHS”) will look like,” Thomson Resources (ASX:TMZ) executive chairman David Williams said.

“The very pleasing aspect of the Study is that even with using today’s current low metal prices and without expanding the resources or fine tuning the processes, the early stage indicative numbers are positive for proceeding forward with the Strategy.

“Whilst I appreciate that they are only indicative numbers, to see that even at today’s prices and using only 4 of the deposits, the indicative cash flows from techno-economic evaluation estimate (before capital expenditure and capital costs) show a positive cashflow over the 8-year project life of A$334M (using a silver price of A$28/oz), with A$206M accumulating in the first 3 years.”

“As we add more resources through further extensional/expansional resource drilling activities and as the metal prices, particularly silver, increase, this NEFBHS project will just get stronger,” Williams said.

“Core have provided a clear pathway of work for Thomson to undertake so that we can move to completing a formal concept study.”

Further testwork is required to validate assumptions regarding the concentrate grades and recoveries and further engineering is required to establish the actual operating and capital costs for the project which will be completed in a formal concept study following further testwork.

This article was developed in collaboration with Thomson Resources Limited, a Stockhead advertiser at the time of publishing.