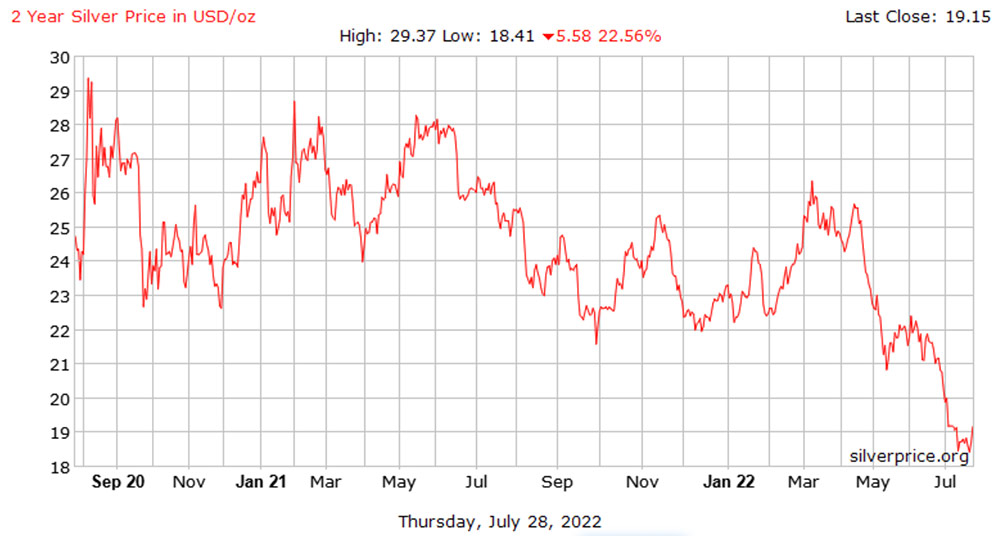 At the end of June, the amount of silver held in London vaults hit a six-year low, reflecting almost insatiable demand for the precious metal from investors and industry.

“This in turn reflects the ongoing strength of physical silver demand. That may sound counterintuitive, given how the silver price has performed recently, but in our view this is the result of a mix of quite different drivers.”

Metals Focus points to a recovery in the behemothic Indian market (mostly jewellery) and surging industrial demand for the recent drawdown, but the popularity of physical silver (and gold) amongst investors has also been at unprecedented levels for over two years.

In March, Metals Focus said Western silver demand was already close to its record highs, with many coin and bar fabricators near full capacity.

Perth Mint’s general manager of minted products Neil Vance says its silver coins/bars have been on allocation since April 2020 “and are still on allocation to our distributors today”.

“We have been selling every single physical silver coin and bar we can make for over two years now,” Vance told Stockhead.

“It has been an incredible surge in demand, and it fits in with a lot of the thoughts around precious metals — which is that in times of uncertainty, people move to a safe haven.”

Why is silver more popular than gold?

While physical gold is also very popular, silver is winning the race for investor hearts.

Vance says silver is a far more affordable product for retail investors to start a precious metals portfolio with. Perth Mint has silver products that go from 0.5oz all the way up to 1kg.

But demand for physical silver belies the pricing action, which has seen it lose ~16% in value this year.

It was selling for ~$US19/oz as of Thursday morning.

Silver – which has a dual role as an investment and industrial product — has come under pressure for two main reasons, Metals Focus says.

“First, expectations this year of aggressive rate tightening by the Fed, which has contributed to the multi-decade high in the US dollar, has weighed on gold, which in turn has affected silver,” it says.

“Second, growing concerns about a recession have impacted base metals, especially over the past 3-4 months, which in turn has hit silver, given its importance as an industrial metal.”

A double whammy. As a result, institutional investor sentiment has turned increasingly bearish towards silver.

“This has been reflected in net CME futures positioning, which has recorded the largest net short of 70Moz (2,184t; as of 19th July) since November 2019,” it says

“Together, this helps explain the jump in the gold:silver ratio, which this month exceeded 92 for the first time since July 2020.”

The often-mentioned ‘gold-silver ratio’ is simply the amount of silver it takes to purchase one ounce of gold. The 20-year average is 60:1, which means silver is currently trading at a historically wide discount to the gold price.

“It also helps to reconcile the fact that the underlying physical market remains healthy, against the backdrop of the silver price which is currently still trading below $US19,” Metals Focus says.