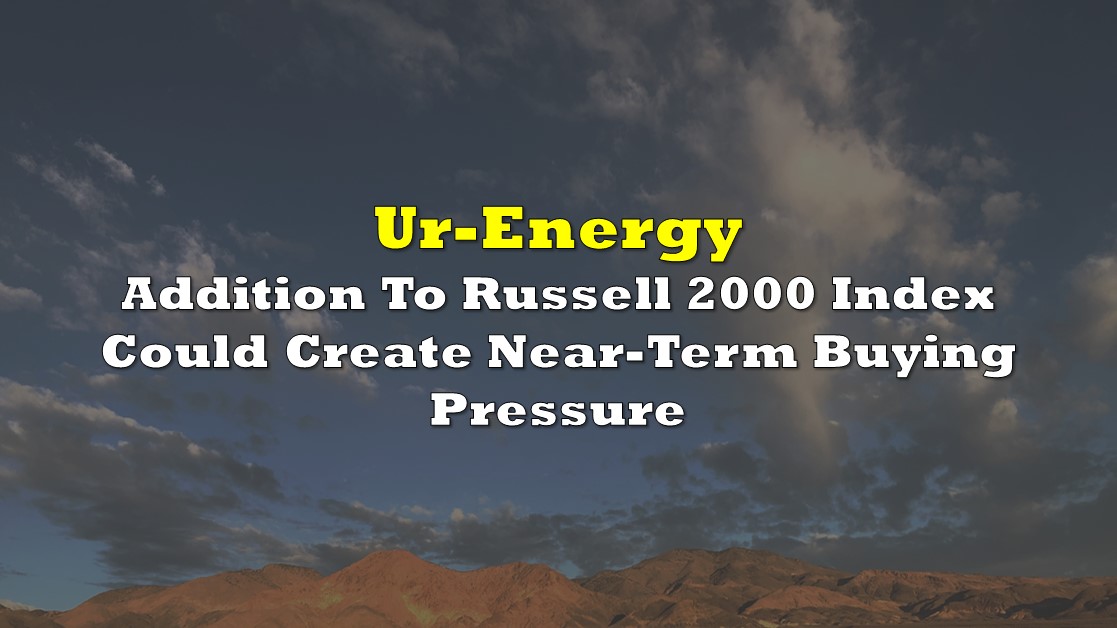 The “Russell Rebalancing” is a major short- and perhaps intermediate-term annual factor in the U.S. markets, as about US$10.6 trillion in investor assets are benchmarked to or invested in products based on the Russell indices. To put that into perspective, as of March 31, 2021, the total value of all U.S. listed stocks was just over US$49 trillion, according to siblisresearch.com.

In other words, that significant total linked to Russell indices is passively invested in 3,000 stocks according to their assigned weights (based on market caps) in the Russell 2000 and Russell 1000. Inclusion in an index can cause noticeable price tension in the stock of an added company, as indexers (and speculators) buy in anticipation of or on the market close of the final inclusion date (June 25 this year).

Ur-Energy Inc. (TSX: URE) (NYSE: URG), a uranium mining company in the U.S. state of Wyoming, was listed on June 4 as one of the new additions to the Russell 2000 Index. Typically, Russell 2000 passive index investors are required to own a stake equal to several percentage points of all shares outstanding of an added stock. In Ur-Energy’s case, each one percent ownership stake equates to the purchase of about 1.9 million shares. Ur-Energy’s average daily trading volume is around 2 million shares.

Lost Creek has not produced any U3O8 since 2019; all customer deliveries in 2020 were made with purchased product. Indeed, almost no U3O8 has been produced by any U.S.-based miner since 2019. Ur-Energy estimates that the one-time costs of ramping Lost Creek to a one million-pound annual production rate would be about US$15.4 million (US$14.9 million of mine development costs and US$0.5 million of capital expenditures).

As of March 31, 2021, Ur-Energy had US$17.6 million of cash, which is approximately offset by US$13.2 million of debt. The company’s operating cash flow shortfall has averaged just over US$2 million per quarter, with comparatively little variability over the last five reported quarters.

Ur-Energy’s cash balance can cover about eight quarters of operating cash deficits at its current cash burn rate. If that rate were to accelerate, the company could have to raise additional equity through a public or private offering.

Buying pressure from passive investors who structure their portfolios to match the Russell 2000 Index could boost Ur-Energy’s shares this month. Longer term, the investment picture is less clear. On one hand, the global uranium mining industry enters its third year of significant structural undersupply and the Biden Administration in the U.S. has consistently expressed its support for nuclear power, a green source of energy. On the other hand, no credible timetable exists for when U.S. uranium miners may decide to re-start uranium production.

This article was originally published at https://thedeepdive.ca/ur-energy-addition-to-russell-2000-index-could-create-near-term-buying-pressure/