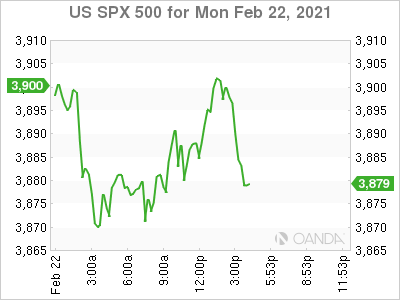 The higher Treasury yields move up, the quicker investors are rotating out of high-flying tech stocks and into stocks in the Russell 2000 Index and Dow Jones Industrial Average.  The move up in rates will not yet test the Fed’s patience and that should allow for Fed Chair Powell to maintain his dovish stance over his last couple of appearances.

Powell will likely reiterate they are nowhere near their employment and inflation targets.  The path of rates won’t change this year, with the earliest that some economists see a potential move up in rates being next January.  Since financial conditions are tightening and with wage pressures remaining nonexistent, that should keep inflation fears from getting out of control.   The economic data has been improving but remains inconsistent and that is all Powell needs to keep his ultra-accommodative stance.

Investors remain committed to US stocks due to the faster pace of vaccinations, which will support a quicker reopening and outperformance over in Europe.  European indexes pared losses after ECB President Lagarde noted the ECB is closely monitoring long-term nominal bond yields.  Europe’s delay of a few months over vaccinations suggest the recovery can’t handle a surge in yields just yet.

The dollar declined across the board as Democrats moved closer to delivering on President Biden’s $1.9 trillion COVID relief bill.  The dollar initially was strong in Europe but has since declined dramatically ahead of Tuesday’s testimony from Fed Chair Powell which should be a dovish confirmation that their current policy is widely appropriate.

Targeting High-Yield Assets With Inflation on the Rise