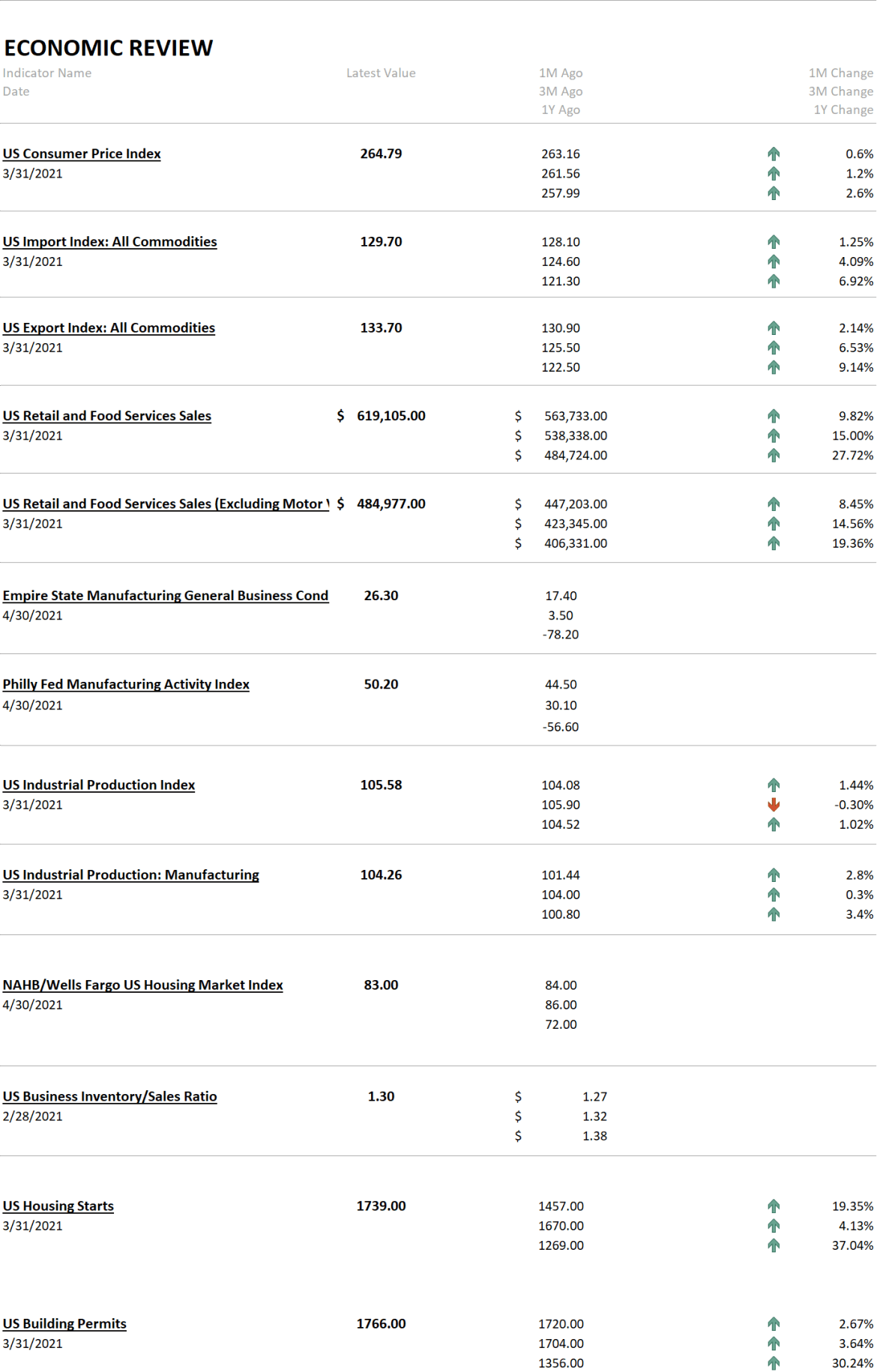 One of the most common complaints I hear about the markets is that they are “divorced from reality”, that they aren’t acting as the current economic data would seem to dictate. I’ve been in this business for 30 years and I think I first heard that in year one. Or maybe even before I decided to lose my mind and start managing other people’s money. Because, of course, it has always been this way. Economic data represents the past while markets look to the future. And that future is not necessarily the one you believe will unfold but one that millions of people form through their buy and sell decisions. You can no more predict what those millions of people are thinking than you can the winner of the next Super Bowl. Well, actually predicting the Super Bowl the last couple of decades has been a lot easier. Just see what team Tom Brady is on and bet on that one. Unfortunately, we don’t have any Tom Brady’s in the markets. The guy who looks like Tom Brady this year may well look like Kim McQuilken next year. Who? Or he might turn out to be the next Bernie Madoff, who finally got his just reward last week.

And so it was last week again as we got a CPI reading of 2.6% yoy (above the Fed’s target!), import prices up 6.9%, export prices up 9.1%, retail sales up 9.8%, Empire State survey up to 26.3, Philly Fed up to 50(!), jobless claims down nearly 200k. All of these reports that point to higher inflation and faster growth produced a market reaction that seemed to defy logic. The dollar was down on the week while bonds rallied, neither of which make any sense based on the present data. That retail sales report was just gangbusters, up 17.1% versus the pre-COVID high in January of last  year. And I was wearing bell bottoms the last time the Philly Fed hit a number that high. So why didn’t the bond market react as so many expected? All we can do is speculate – we can’t get inside the heads of all those traders who bought bonds and sold the dollar – but it does seem that the bond markets don’t think the pace of recovery is sustainable. No kidding and buy the rumor, sell the news.

Bonds and the dollar were somewhat the outliers last week as most other markets reflected the improved economic performance. Stocks were up, of course, because nothing seems to make stocks go down for more than an hour or two. But copper and crude oil, commodities most people think of as economically sensitive, were both up on the week – although both are still below their peaks of about a month ago. Gold traded more in line with bonds, rising a little over 2% on the week. Copper was up more though so the copper/gold ratio rose slightly, a positive economic sign. All in all it was a week where markets reflected the mood of their participants which is apparently confused as all get out.

Markets rarely reflect the current economic reality because market participants are always looking ahead, trying to position themselves for the future they expect. When a consensus develops about that future, all markets tend to move together. From August of last year – and especially since November – a consensus developed about the end of the virus. As vaccines were distributed, states would open up and economic activity would resume. Consumers, flush with savings and some of Uncle Sam’s bucks, would shop their little hearts out to make up for all they missed last year. They’d go on trips, eat out, go to ball games and generally slake their thirst for public activity. Markets were pretty much in agreement as bond yields, stocks and commodities rose. Gold, an anti-growth asset, fell. And early this year the dollar even joined the party as the US seemed to pull ahead of the rest of the world in beating back the virus.

Now that reality has largely arrived. Those retail sales numbers certainly seem to confirm it and we see it too in travel bookings. And we see it when we go out to dinner now along with everyone else trying to get a table. But markets have become a little more divergent over the last month. There is no consensus, yet, about what comes next. Everyone already expects some kind of boom in the coming months, a rip-roaring summer of fun; it’s already priced in. What markets are searching for now is an answer to what comes after the boom, what comes after we get the pent up demand satisfied.

I often say that it isn’t our job as investors to predict the future. Our job is to interpret the present, to observe not predict. But that doesn’t mean we don’t think about how the future may evolve. In broad strokes, we know what creates economic growth. The only two things that really matter are workforce and productivity growth. The only way to make more stuff is to put more people to work or to make existing workers more productive. The reason we have been growing at 2% for the last decade is because population growth has slowed while labor force participation and productivity growth has been weak. When we look past the re-opening boom it is those measures that will have to move to produce a better outcome. It is probably harder today to do that than any time in my life. The virus impacts all those items and we have no way of predicting the long term consequences. In that context, some confusion on the part of investors today makes perfect sense. Pretty soon though a new consensus will develop, one that starts to incorporate innovations and investments that will impact tomorrow’s productivity growth, economic growth and corporate earnings. It is during these uncertain periods, these transitions, that we get increased volatility. Uncertainty leads to a lack of liquidity (no conviction) which leads to volatility. So fasten your seatbelts and put your trays in the upright position because we may be about to hit some turbulence. I hope you’ve enjoyed your vacation.

Industrial production was a little disappointing considering the surge in activity but some of that was due to reduced utility output after the cold spell passed. The manufacturing portion was quite a bit better than the headline.

Next week’s calendar is very light. We will get a read on the CFNAI, one of my favorite broad indicators. It tends to track the Philly Fed pretty well so I’d expect a pretty big rebound from last month’s ugly reading. We’ll also get a read on existing and hew home sales.

Stocks were up but the bigger winners were commodities and real estate. With the dollar down foreign markets also performed pretty well with Europe continuing to outperform. Growth beat value again last week but still lags significantly YTD. Large cap stocks also had another good week while small cap lagged. YTD though, small and value continue to lead the pack. I wouldn’t put much emphasis on the outperformance of growth recently, at least not yet.

Sector performance reflected investor confusion as well. Materials and real estate, both cyclical did well but so did health care and utilities, both defensive.

I don’t have any strong opinions about what the post boom period will look like but I will admit that I have a hard time seeing how current economic policy will move the needle on the things that matter. The Biden administration may be slightly more lenient about immigration than its predecessor but political reality means immigration probably won’t produce any big changes in the labor force. Generous unemployment benefits play a role in keeping people out of the labor force too although that probably isn’t as big a problem as it is made out to be. States enforce the rules about collecting benefits. And I am old enough to know that anything labeled infrastructure is likely to be nothing more than a grab bag of political favors so don’t expect any productivity miracles from that front. What I don’t know is what will come from the private sector. Like most people I think, I am astonished at the speed at which the private sector produced multiple vaccines. And the technology used to produce the Moderna and Pfizer vaccines holds promise in other areas. I also know that necessity is the mother of invention and that there will be some innovations caused by the virus in other industries that pay dividends. Americans are at their best when the chips are down; the 1930s were a very innovative time. Whether there will be enough to raise productivity – and economic growth – significantly I can’t say. But I am certain the market will let me know when the time comes.